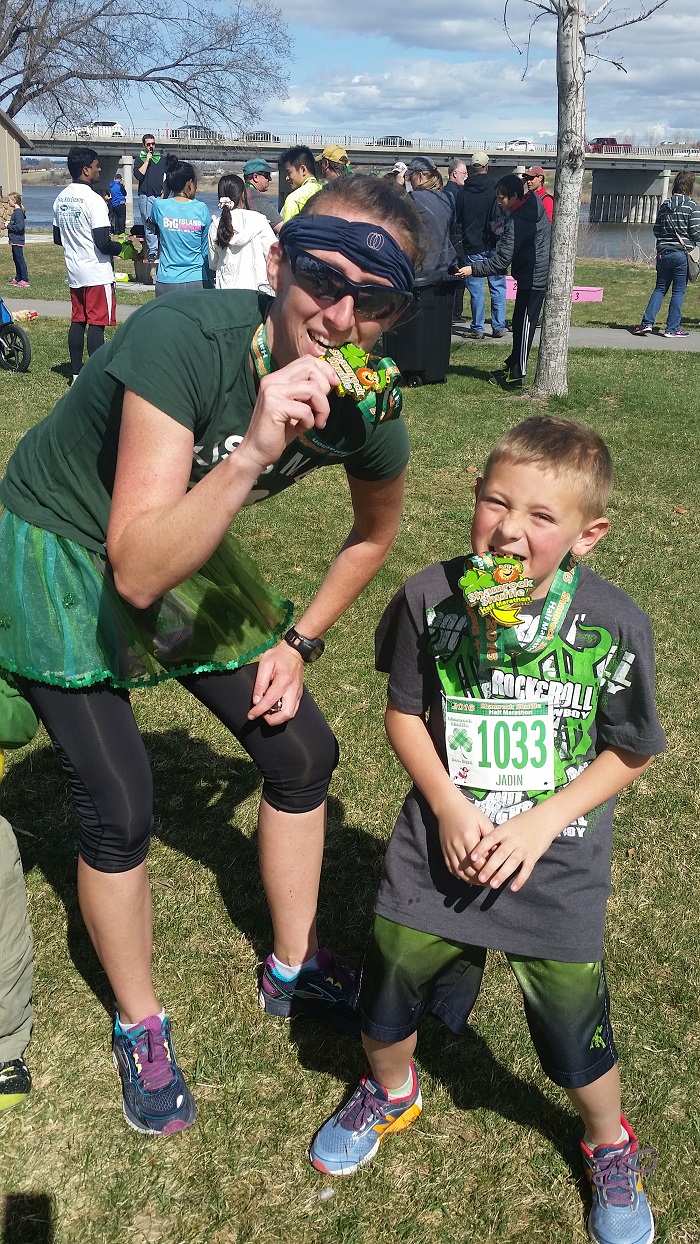 Ultrarunner Mom, Lindsey Callahan, knows what running can do for the body, mind, overall health, and relationships.  Not only is she an accomplished utlrarunner, but she’s a mother to five children, including an eight year old son, Jadin, who took up trail running to manage his struggle with Attention Deficit Hyperactivity Disorder (ADHD).

To ultrarunner Mom Lindsey, there’s no way to overlook the positive and remarkable impact that running has on Jadin’s ADHD, his happiness, or his goals–or on the lives of her other children and relationship with her husband.

Lindsey gets the transformative power of running.  When it comes to her son and his running, the sport is a positive influence in his life, as well as in her mother-son relationship.

Lindsey and Jadin getting the miles done.

One thing about being close and in tune with my son is knowing when to push him and when to hold him back and when to let him loose.

Read on for the full interview with Lindsey. 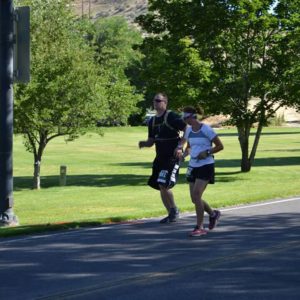 Lindsey runs with her husband. Her ‘biggest supporter.’

1.  How did your trail running and racing come to be?

I guess I started trail running as far back as 15 years ago when I worked for the Boise National Forest service station in Idaho City, Idaho.  Before that I ran cross country, track and played basketball. I worked for the trail crew, and since we had 10 workers, we were red carded and were called out to fight fires.

Summers after high school were spent on the trails in the mountains.  In 2011, I started training for my first marathon.  I ran the famous Idaho Potato Marathon.  I met a man that was running the 50 states and for 6 miles he told me about the book, Born to Run. Then I ran with a gal that told me about these ultra marathons and how she preferred to run them vs. road races.  She told me about the October 50k run out of Idaho’s Foothills.  After I ran my first marathon, I read Born to Run and signed up for the Foothills 50k Frenzy. I finished my 1st 50k in around six and a half hours.

2.  What influenced you to start running with your 8 year old? And What does a typical mother-son training run look like?

When my son, Jadin, was about six years old, my husband and I started seeing changes in his personality. Little glitches. He ran his first 5k, which turned out to be almost 4 miles in 39 min. By the time he was seven, his glitches became more progressed. By that time he had a few more 5ks and 10ks under his belt.  He decided he wanted bigger medals like “mamma” and wanted to train for a half marathon.
At that time, Jadin’s furthest run was a 10k, so we had our work cut out because he wanted to run the Shamrock Shuffle [1/2 Marathon], which was three months after his 10k.  We got him a couple good pairs of running shoes.  He ran after school 3, 4, 5, 6 miles the first week.  We ran 5 minutes, walked for 1 minute.  When he tired, we ran 3 minutes and walked for 1 minute until he finished. 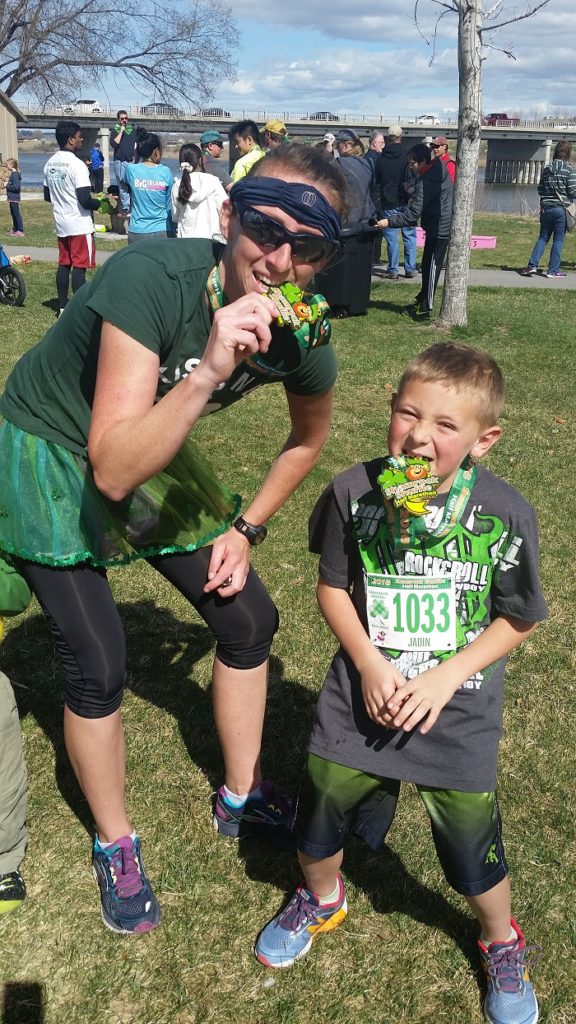 Lindsey runs with her son. Running helps her son manage his ADHD and anxiety.

We live next a track so we did speed work on the track.  100m, 200m 400m 800m 1600m sprints/runs. Jadin lifted weights at home.  His furthest run was 10 miles which we ran in a wind storm.  That turned out to be in our favor because at race day it turned out to be really windy.  He finished 2hrs 25 min for his first half.
Jadin ran another half marathon two months later.  Then he ran the Struttin’ for Stuffin’ Half.  Then the Shamrock Shuffle again when he was eight in a time of 2:07.57.
The ADHD Diagnosis
In July 2016, Jadin’s glitches had severely progressed and he was referred to a psychiatrist where he was diagnosed ADHD and prescribed medication.  I knew he had it since I deal with it myself and runs really heavily on my side of the family.  His grades dropped. He was impulsive.  He often got in trouble at school.  Jadin got his recesses and PE time taken away and was becoming one of the naughty kids.  He could not focus at all.  He would often cry and say, “I don’t know what’s going on with my brain. “
The meds began to help him and his grades started going back up.  But then the anxiety hit.  Jadin began pulling his eyelashes and eyebrows out. Finally, after a few visits with his counselor his psychiatrist prescribed an anxiety medication.  It was a huge turn around for him, and he became his happy self again.

Running has helped Jadin deal with his ADHD symptoms by giving him an outlet for his high energy.  Together we enjoy watching running movies. The Barkley Marathons: The Race that Eats its Young is a favorite.  Prefontaine is also a favorite and he aspires to be like [Steve] Prefontaine.

Running with me has helped him so much.

This last year during the Olympics, he asked me if he could ever be the Michael Phelps of running, since he deals with ADHD, too. I told him Michael Phelps had to work really hard to get to where he is with swimming, but if you want to excel in running you have to work real hard at it.
He said, “I changed my mind I want to be like Prefontaine and Michael Phelps!“
Over the course of this year he’s gotten a lot of support  from the running community.  We still have the haters that say kids should never run that far.  I tell them if he wants to run I’m not holding him back, besides people were “born to run!”
My relationship with him had always been strong, as he is a mama’s boy, but he wants to run far like me. When he visits his psychiatrist each month we often talk about how running has helped him and about the races we ran during the month.
Something we do find humorous is when we’re running a half marathon, and we get to the 5k and 10k turnaround locations and race volunteers tell us to turn around. They are surprised to see a kid as young as him running a half.

My big race for 2017 so far has been a 48hr race that I ran in March.  I ran 123.67 miles and was 1st over all female for the 48-hour.  My furthest distance and longest time running. My PR distance before was 70.4 miles and I bonked after 20.5 hrs.  I ran through high winds,  rain storms, mud, the cold and knee deep water.  In May, I ran the Sharlie Shuffle 12hr race in McCall, Idaho.  Before running the 48-hour, Jadin wanted to train for a marathon, but now he wants to run a 100 mile race with me!

I don’t see many families around here running together. But I do have friends that are starting to get their children into 5k races. That is something I’m hoping families catch on to.

My husband and I have 5 kids. Two are mine. Three are his. Blended family. My husband was able to adopt Jadin, and my youngest, Bradley.  The three older children have gotten into running races over the last couple years. Two of the them prefer the 5k distance, but one of them, Sara, ran her first half marathon last year.  She also runs cross country and track partly because of my influence!

One thing that we do as a family is volunteer for races.

We run aid stations and finish lines. We even volunteered for the hot chocolate race this last January, which occurred during a blizzard, but we were out there helping with the race!  When the kids want to run a race, I have them earn their race entry; that way they have an opportunity for service and to help other runners. After they volunteer, they get a code for a free race! They get more out of the race when they earn their way rather than Mamma Lindsey and Daddy paying for it.

6.  Do you think parents are in the best position to know whether a child is ready to run, train and race?

I think parents are in a better position to know their children’s limits, especially if they are seasoned runners.  One thing about being close and in tune with my son is knowing when to push him and when to hold him back and when to let him loose. I also keep his pediatrician/counselor/psychiatrist informed on his running and seek their advice too.

My pre-race talk with Jadin consists of [talking about] what his goals are for the race and how he’s going achieve his goals.  I ask him, ‘what’s the most important thing a runner can do before the start of the race?’
He tells me I know mom. I already went #2!
Then a prayer and we end with “Strength and Honor” and a hug!

8.  What advice do you have for parents who are thinking about taking up running or encouraging their kids to run?

My advice for parents is know your children’s limits.  Know their strength.  Don’t force them into running because they probably won’t enjoy it.  If they want to run, then work with them.

Ask them what they want to get out of running.  Help them set some short term and long term goals and help them achieve those goals.

And lastly make it fun.

Running should be fun. Sometimes not so much during a race when your body hurts and you want to quit.  Watching how happy Jadin is when he finishes a race with a new PR and a smile on his face, especially after all he’s been through so far and knowing the struggles to come with his ADHD and anxiety, makes it very fulfilling!

There should always be joy in the journey!

*Learn more about Childhood ADHD at the National Resource on ADHD.