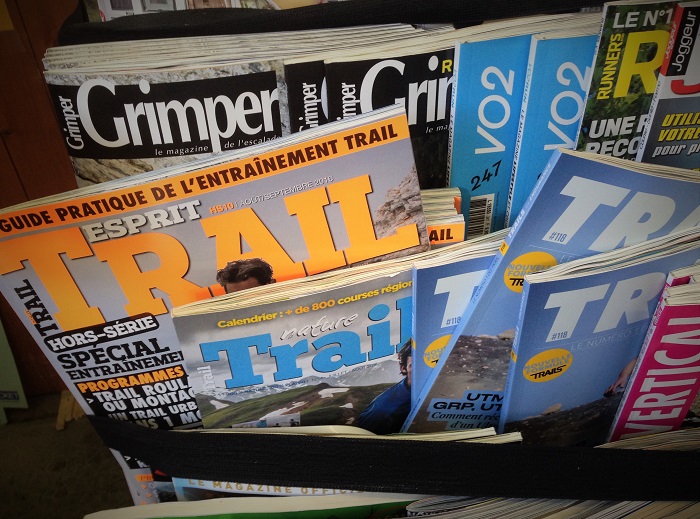 If you’re looking for the best running magazines for trail runners, mountain runners, sky runners, and aspiring runners, you’ve clicked to the right place for an awesome list!

I love print magazines.  Running magazines to be more exact.

Whether I’m at a cool bookstore in NYC, an airport in Montreal, a train station kiosk in Europe, or in a small French mountain town convenience store, I feel compelled to check out which running magazines stock the magazine shelf.

Disclosure: As a blogger, I’m required to let you that some of the links in this post are affiliate links and if you go through them to make a purchase I will earn a commission. Keep in mind that I link these companies and their products because of their quality and not because of the commission I receive from your purchases. The decision is yours, and whether or not you decide to buy something is completely up to you. Thanks so much for being here.

Real Pages to Flip Through

It doesn’t even matter whether I can read the magazine’s language. I simply love flipping through the pages. If the magazine features running, it’s in my hands.

There’s something cool about the way a running magazine connects you to your ‘tribe,’ even when you don’t have your running shoes on.

Even kids can be drawn to running magazines.  In my 13 years of parenting and 8 years of homeschooling my children, I’ve discovered that if you litter your house with quality and interesting reading material, kids will gravitate to it.  This includes running magazines.  Though they may not read the pages, they will at least flip through the pages and find inspiration.

In my travels, I’ve come across many different print running magazine titles.  Here are 7 magazines to inspire your trail running, training and racing.

If you’re new to trail running or racing, you might think the sport is a brand new spin off from road running, but UltraRunning magazine which holds itself out as “the voice of the sport” has been around since 1981 and proves that the sport has deep roots.  The magazine is published 10 times a year.  Language: English.

Trail Runner Magazine is a popular trail running magazine that covers trail running and the racing scene.  The magazine is published 7 times a year. It is also available in Kindle version.  Language: English.

The number one trail running, mountain running, and endurance trail sport magazine in Europe.  The magazine is published 6 times a year.  Language: French.

Although not trail specific, Runner’s World is a popular running magazine that includes trail related training, racing, and gear features. The magazine is published 11 times a year. Language: English.

With a Canadian focus, Canadian Running covers running in Canada, and includes features of interest to off-road runners, including places to run and gear reviews. The magazine is published 7 times a year. There is also a Kindle Version. Language: English.