Is Distance Running, Marathons, or Ultra Marathons Safe for Kids?

Is it safe for kids to trail run?

Is it dangerous for children to run half-marathons or marathons?

What about ultra marathons?  Will running and racing adversely affect kids’ growth and development?

Is there a point when physical activity becomes too much?

Should properly trained kids be allowed to participate in endurance races?

These are some of the questions people ask when it comes to distance running with kids.

While I’m not a doctor, I am a mother of four kids who love to run.  I have yet to read or see a medical report that says that running distances is harmful to kids.

But I have read, seen, and heard that too little physical activity is harmful for kids.  Who hasn’t, right?  Childhood obesity is a trend that doesn’t look like it’s going to disappear anytime soon, particularly thanks to technology, devices, and electronics, such as gaming consoles and smartphones.

Apparently, the best researchers can surmise is that, “no one really knows for sure what happens to kids five, 10 or 20 years after running” a long distance like a marathon. In the 2014 The Atlantic article, How Far is Too Far for Kids to Run, it is pointed out that while some in the medical community are concerned about children’s mechanics and the ability to absorb impact to bones, joints, and soft tissues, no one really knows for sure what, if anything, happens to kids who run long-distances in the long term.

Even the idea of setting minimum age thresholds for participation in races is controversial, as those thresholds are arbitrary, make assumptions about child development and differences in maturity, and are not supported by concrete findings.

While some medical professionals aren’t keen on the idea of young children participating in long distance events, others don’t see it the same way.  According to a statement by the American Academy of Pediatrics in that The Atlantic article, “There is no reason to disallow participation of a young athlete in a properly run marathon as long as the athlete enjoys the activity and is asymptomatic.” 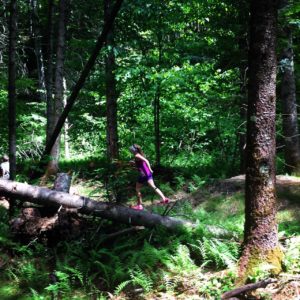 So, should a parent let a child run distance?

Having grown up exposed to gymnasts, including having two high level gymnast athlete sisters, runners, and endurance athletes, I know that young, competitive bodies can be put through tough physical tests.  Proper training in any sport is key. Making safety a top priority is also imperative.

Quite honestly, I would prefer my children to be endurance runners over gymnasts or football players any day. I would much prefer my son to trail run than play lacrosse (thankfully, he now prefers running over lacrosse too). I have seen injuries and long-term consequences of other sports, and I simply don’t see how running risks could be any worse. Actually, I think any risks are likely far less.

I would much prefer my kids to be out running and playing on trails than sitting around playing Super Mario Bros. on the Wii U or playing Minecraft for hours on end on their iPads.

Studies do show that endurance sports are good for cardiovascular and emotional health.  Studies show that running is a good pick for fitness and stress management.  Though the studies may not be child-specific, I’m convinced that the benefits of getting kids hooked on running far outweighs the benefits of sitting around gaming, surfing the web, or hanging out glued to electronics.

Running is also a great way to connect kids to nature.  Studies do show that there are health and mental consequences when that connection is lacking.  Getting out into nature changes the brain and helps with stress coping mechanisms.

If distance running and properly prepared for racing helps my children develop connections to nature, improves their fitness, and helps them build life-long emotional and coping skills–and importantly, they enjoy running– running is a no brainer.

It’s also a matter of common sense.  If it’s fun to run. I want my kids to do it. If trail running is an adventure and fuels their curiosity and love of nature, I want my kids to run.  If they love racing and it is empowering, I want them to race. If something hurts, I want them to stop.  If they are too tired to run, showing signs of being overtrained, burnout, or boredom, I want them to stop, take it easy, change routes, hang out on the couch and watch movies, or do something different for play, fitness, and fun.

When parents are tuned into their child, attentive to the child’s training and running, and sensitive to the child’s abilities, age, development, and physical and mental shape, there’s no doubt in my mind that they are in the best position to know whether running is good or safe for their kids.

Only the parent and child can really know how far becomes too far to run.

Do you agree?  What are your thoughts about letting kids run long distances?